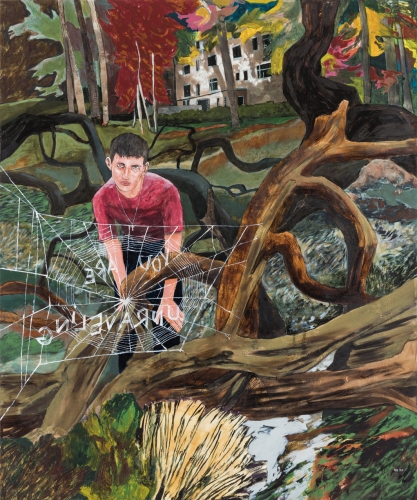 The circus has been cancelled, but no one seems to have told the jaunty group of weirdos posing at the center of the Genieve Figgis painting from which this exhibition takes its name. The giddy performers—a natty bug-eyed Kabuki demon wearing a top hat and toting a fuchsia parasol, a tiny woman in a ball gown, a lion, a yeti, and a topless green-skinned go-go dancer among them—look ready to put on a show. Aside from this small cohort, the cavernous big-top tent they occupy is empty, and the windows appear to have bars. Figgis has a knack for making the ghoulish, soupy goblins and half-melted aristos that inhabit her canvases feel eerily familiar, despite their fanciful distortions. In this moment of pandemic limbo, as we wait for the day when we can finally ditch our face masks, dine indoors, and work from anywhere but home, these ostensibly oblivious prisoners could be us, delusionally optimistic that life will someday be the same. But if the public rituals we once enjoyed are gone for good, Figgis seems to ask, then what, exactly, are we monsters, freaks, and narcissists supposed to do with ourselves without an audience?

Answers came in the form of a stellar suite of paintings by Scott Kahn—another standout in this psychic carnival of a show, which also included work by Hernan Bas, Cecily Brown, and Sue Williams. Kahn, who has been translating ambiguous emotional and psychological states into quietly surreal landscapes and interiors for decades, offered insights into how we might endure and even appreciate a lonelier world. In Kitchen Table, 2020, a small oil-on-panel not much larger than a sheet of stationery, the eponymous piece of furniture occupies the center of the composition, as though we were standing above it, about to sit down. The surrounding room is composed of a starry night sky instead of walls, ceiling, and floor. Two nondescript double-hung windows floating in this galactic expanse occupy the upper corners of the picture. Each one incongruously frames a different view: A cluster of gray storm clouds gathers in one, while blue skies fill the other, as though two separate days were simultaneously visible from our seat at the table. A full moon hangs between the windows, and our plate, an identically sized, glossy-blue disk, tilts up from its place mat, as though it, too, were a celestial body belonging to its own domestic orbit. Kahn constructs the kitchen as a cosmic center—a vantage point from which we can witness minutes, months, and years as they blur together over a succession of solitary meals. Several other paintings were more ominous: Clawlike shadows overtake an empty lawn in Azaleas, while a series of stark, concentric doorways frame a closed door with no knob in The Poet’s Room, both 2020. A sense of anticipation and potential and airs of hope and dread exist in each of Kahn’s panels, complementing the uncertainty of the current moment. In Oasis, 2001, a painting that recalls the works of both René Magritte and Remedios Varo, a room sparely furnished with an easel, a simple desk, and a chair hovers above a brooding, cloud-streaked sky and navy ocean furrowed with whitecapped waves. But the painting’s title suggests that this setting—an artist’s studio equipped with the bare essentials—is a refuge, a mental shelter from the storm. The subtle features and conditions of our more intimate spaces may be all that we can expect to dependably experience these days—but such environs, Kahn reassures us, are well worth exploring.

The other paintings in the show—libidinous cartoony canvases by Williams, and loose, Picasso- and Degas-inspired watercolors depicting artists and their models by Brown—related more obliquely, if at all, to the themes of anticlimax and aborted public spectacle implied by the show’s title. The Revelation in the Rambles, 2020, a large acrylic-on-linen by the reliably great Bas, however, captured this pervasive sense of suspended animation and its consequences. In it, a young man crouches in a marshy tangle of roots before a spiderweb containing the words YOU ARE UNRAVELING. That may be true, but Bas seems to suggest that we are weaving new stories even as an old way of life comes apart.